The oldest wheel known was discovered in Mesopotamia and probably dates back to 3,500 B.C.

This wheel was believed to have been made by the Sumerians. It was made of planks of wood joined together. The picture above briefly describes the stages of development of the wheel.


Stage one: Early men placed rollers beneath heavy objects so that they could be moved easily.
Stage two: Early men began to place runners under a heavy load, which they discovered would make it easier for the load to drag. This was the invention of the sledge.
Stage three: Men began to combine the roller and the sledge. As the sledge moved forward over the first roller, a second roller was placed under the front end to carry the load when it moved off the first roller. A model of a sledge with such rollers is in the Smithsonian Institution.
Stage four: Soon, men discovered that the rollers which carried the sledge became grooved with use. They soon discovered that these deep grooves actually allowed the sledge to advance a greater distance before the next roller was needed to come on!
Thus, in Stage five: The rollers were changed into wheels. In the process of doing so, wood between the grooves of the roller were cut away to form an axle and wooden pegs were fastened to the runners on each side of the axle. When the wheels turn, the axle turned too in the space between the pegs. The first wooden cart was thus made.
Stage six: A slight improvement was made to the cart. This time, instead of using pegs to join the wheels to the axle, holes for the axle were drilled through the frame of the cart. Axle and wheels were now made separately. 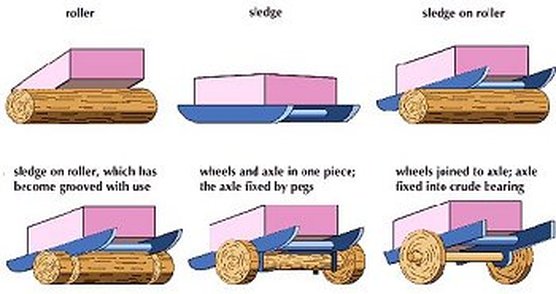